György KirsMay 19, 2012Protection of the EnvironmentComments are off for this post

From the middle of present century our planet can expect calamities like much more droughts and floods as well as an increase in the number of pests and extreme weather conditions. The international political think tank, The Club of Rome has recently issued its latest report.

“We yearly emit double the amount of greenhouse gases that forests and seas are able to absorb”, said Jorgen Randers, Norwegian economic expert and futurologist summarizing the report entitled The Club of Rome 2025, who is one of the writers of the study at issue. Established in 1968 and dealing with international political affairs the think tank published its report on Monday. “Negative impacts will be significant. Humanity has exploited the planet; in certain cases we are to see local disasters before the year 2052”, stated Randers in relation to the report in Rotterdam. “Sea level is going to rise by half a meter, the Arctic ice is going to disappear during summertime and the ‘new’ weather will afflict tourists and farmers, too”, pointed out Randers. In his view, the peak of greenhouse gas emission will be in 2030, however, it is already too late to reduce global rise of average temperature under 2 Celsius degrees, which would be still acceptable. By the year 2080 the average temperature of the planet will be 2.8 degrees higher and this may cause intensifying climate change by itself. 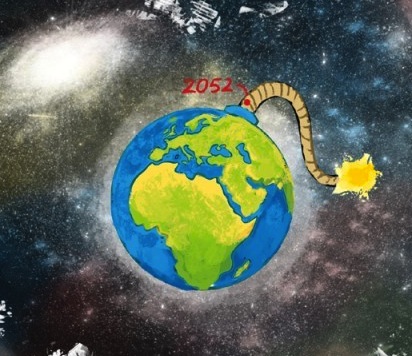 Randers believes that constant expansion of economy is harmful to climate and natural resources. He highlighted that according to researchers’ calculations economy does not produce profit any more, if compared to the price that has to be paid due to environmental pollution. In the view of the Norwegian scientist, world’s GDP will increase at a much slower rate than expected, because a lot of countries have already utilized their economy’s advancing potential. The futurologist also thinks that natality will be less. The Earth is going to give home to 8.1 thousand million people in the year 2040. However, afterwards this number is going to decrease. “Things cannot go in their accustomed manner, if we want our grandchildren to live on a planet which has a future and is dealt with properly”, added Ian Johnson, secretary general at The Club of Rome. The council called world’s attention to the limits of growth and environmental pollution among the very first as far back as 1972 causing worldwide sensation. This report has been made with the contribution of leading scientists, economic experts and futurologists. Among the club members are former and present-day heads of states, UN diplomats, businessmen as well as scientific researchers. Those active in the club are among others Beatrix, Queen of Holland, Javier Solana, former NATO secretary general, Hans-Peter Dürr, quantum physicist and philosopher and Mikhail Gorbatschev, the last head of state of the Soviet Union.

Related Articles
A Real Animal is Someone
Poisoned Earth
Amazon Blaze: Is it Worse than in Previous Years?